The Median XL barbarian class is the toughest melee character in the game, but also has good ranged attack capability in his throwing skills and ancestral spirits. 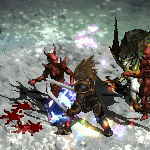 BACKGROUND OF THE MEDIAN XL BARBARIAN

The tribes of the Arreat Highlands guard an ancient secret from the dawn of history. The Worldstone, created by Inarius to protect the world of Sanctuary against overt angelic or demonic influence, has often been the target of attacks by mortal emissaries of the Burning Hells looking to destroy the barrier. Should the Worldstone fall, all of Sanctuary would be in grave danger.

So much for the commonly accepted theory. Some say the Worldstone may have a darker side. Inarius did not want an empowered third party in the Eternal War. What he really wanted to create was a world of worshippers. The offspring of an angel and demon, the first humans - the nephalem - possessed certain powers that could prove to be a threat to the dominion of Inarius.

To suppress these awakening powers, Inarius imbued the Worldstone with a dampening field that would forever limit the innate magical abilities of humans. Within a few generations, the era of the nephalem was over and the Old Ages begun.

Inarius had been very thorough. Only the strongest wills could muster more than simple parlour tricks. Individuals with some lingering power grouped together to colonise the ley lines, building great towers and circles of stone to channel the remaning energines. At these sacred places, the first formal mage clans were founded - the primeval Vizjerei, Ennead and Annuit.

Many millennia later, the stalemate was shattered by the covert actions of mankind's mother goddess, Lilith, who sparked the extinct nephalem flame in a small group of humans. The edyrem rampaged over the Cult of the Trinue, her unwilling servants, but this was a price she was willing to pay if they would proceed to take out her former consort and mortal adversary - Inarius.

But she had underestimated the edyrem and was destroyed by her own creations. Inarius and his religion of treachery fell not long afterwards, but not before the actions of the edyrem drew the attention of the celestial and infernal forces to Sanctuary.

The intervention of Tyrael narrowly prevented the complete destruction of Sanctuary. The warring sides signed a blood pact to never set foot or claw on Sanctuary again until humanity had grown and made its own choice in the Eternal War. It should come as no surprise that the forces of Hell quickly found a way around the pact, while the armies of Heaven - now led by rising star Imperius, who never had much love for mankind - remained stoically at a distance.

It is believed that the barbarian people, more than any Eastern or Western loremaster, know the true history of Sanctuary. Still they choose to protect the Worldstone and its crippling antimagic field. Increasingly desperate attempts have been made to reach the Worlstone and shatter it, from ragtag armies of farmers and citizens who lost everything in a demonic attack to an organised strike by the paladins of the Silver Hand, who are usually not known as proponents of godless magic.

Perhaps the barbarians believe that the nephalem are their gods and attempting to seize nephalem power would be an act of blasphemy. Or maybe the tribes have quietly switched sides and are now working with the demonic legions against the rest of humanity...

The great nephalem king Bul-Kathos brought humanity the secret of steel. After many millennia, barbaric weaponsmithing is at its peak.

Barbarian berserks are known to wield two tribal swords, unleashing a hurricane of blades upon their enemies. Other tribal warriors prefer the striking power of a massive two-handed axe. Although small quantities of these weapons have fallen off the wagon and appeared on the Southern bazaars, they are much too large and heavy for any other mortal to wield. It is said that many tribal weapons are jinxed by the barbaric witchdoctors; many a trader has been seen speeding through the barbarian lands on his last horse, carrying the ridiculously large steel blade that may have bankrupted him to cast it into the fires of Sescheron and lift the curse.

Although some shaman are seen wielding maces and other channelling weapons, most prefer the same weapons as their brothers in arms. To the barbarian tribes, a shaman is first and foremost a warrior and should ever be ready for battle, fighting alongside his spirits. Anything less would be unworthy of one of Bul-Kathos' bloodline.

The hunters of the steppes prefer to engage their prey from a distance. There is no honour in dying by the claws of a frost bear. While seen as valuable members of barbarian society, bringing in the food necessary to keep the barbaric armies in fighting condition, most consider the hunters as less than a warrior, though much more than any Southern soldier. Their heavy throwing axes can deliver silent death from a distance and have enough stopping power to halt an onrushing army.

Many barbarian warriors grudgingly accept the usefulness of a shield in battle. Getting oneself killed without taking down anyone else is a foolish waste of Arreat's blood.

The barbaric bronze and gilded shields are the ultimate prize for their enemies. Although their weight would cripple a Southern warrior, the base materials fetch a very good price on the bazaars... provided you bring a beast of burden or be prepared to roll the shield back to the civilised world.

Barbarians start with the following skill in their icon list.