The Median XL necromancer class can summon a wall of minions, create totems to fight for him and has access to powerful melee and crossbow skills. 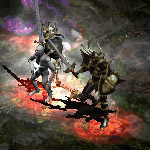 BACKGROUND OF THE MEDIAN XL NECROMANCER

Contrary to popular opinion among the unwashed mashes, necromancers are not power-hungry maniacs. They may in fact be the only ones who know what is truly at stake.

Historically, the first mortal necromancer was the edyrem Mendeln. Sensitised by the presence of the nephalem warrior-mage Uldyssian, he heard the calling of an ancient being from the dawn of Creation  the dragon Trang-Oul, ruler of the Plane of the Dead.

Trang-Oul explained that Sanctuary was not meant to be. A fallen angel and wayward demon, tired of the never-ending war, had created their own kingdom to rule and humanity to serve them. But if either the High Heavens or the Burning Hells found out about the mortal plane, the Eternal War would descend upon it and tear it to pieces.

Trang-Oul and his pupil, the nephalem Rathma, were powerful beings, but not powerful enough. The two had to watch as first the Hells and then the angelic legions discovered Sanctuary. Only the vote of the archangel Tyrael prevented the avenging angels of Heaven from immediately destroying the traitor Inarius impure creations. Both sides signed a blood pact to keep humanity out of the war and allow them to develop, grow and perhaps make their own choice between good and evil.

Before his final voyage to the Plane of the Dead, Mendeln recorded the events in what would become the necromancers holy book, the foundation of the cult of Rathma.

The priests of Rathma strive to uphold the balance between the High Heavens and the Burning Hells, for if the balance swings too much, the fate of the mortal plane itself would be in jeopardy. A victory of the forces of chaos would mean hell on earth, whereas if the angelic legions win the Eternal War, their likely next step would be to get rid of the last taint on Creation and annihilate the mortal world.

In times when the forces of Light are strong, this earns them the disdain of the masses. For this reason, the Cult hides underground, only surfacing in times of need...

The Cult of Rathma created a vast arsenal of exotic weapons to augment the magic and combat abilities of their zealots.

The Rathma priests are known as magical experts, not mighty warriors. But with the right mixture of alchemical ingredients, even a necromancer can turn into a slavering scythe-wielding maniac. Death Knights, the warrior branch of the Cult, are commonly seen wielding wicked hexblades or enchanted scythes capable of slicing through steel and demon scales.

Due to the high clergy's ban on crossbow development in the overworld and the low quality of black market weapons, the heavy crossbows and trebuchets of the Dark Rangers are the most powerful in the world. Although they are not known for being exceptionally brave or tough in combat, the arbalists of Rathma use the sheer damaging power of their advanced weapons to great effect.

Summoners and totemcrafters use wands or the ancient Rathman bone staves, which require both hands to wield and offer little protection in combat - but an army of the dead and his voodoo powers are all the protection a necromancer ever needs.

Base cast rate increased when wielding a staff.

The necromantic skull shields are not the best at blocking arrows or blades, but augment the magical abilities of the wielder. Some say the spirit of the former owner of the skull is bound within the item and slowly drained to power the necromancer's magic.

Necromancers start with the following skill in their icon list.